Optionally-Manned Systems and the Future Naval Force (Re: The Maritime Executive) 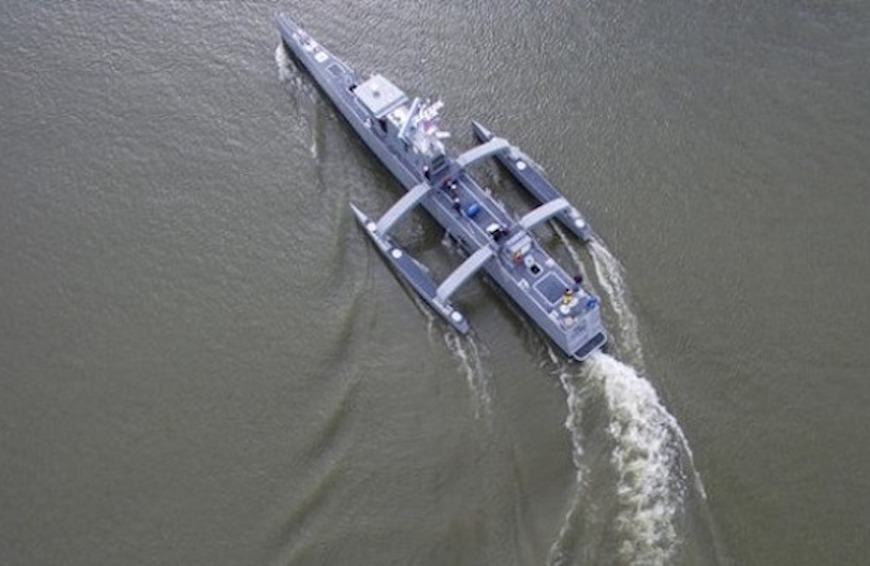 The Washington-based Center for Strategic and Budgetary Analysis recently released a thought-provoking assessment of the U.S. Navy’s plan for its surface forces, entitled ‘Taking back the seas: transforming the U.S. surface fleet for decision-centric warfare.’ While it accepts many of the underlying principles of the U.S. Navy’s force structure proposals, the study puts forward several major modifications, some of which may be relevant to allied navies seeking to transform in a fast-changing technological environment.

One initiative with which the CSBA study is in full agreement and which has relevance to other navies is the increase in the number of long-range strike and anti-ship weapons at sea. Surface navies need to become more lethal and less focused on their own defense. The U.S. Navy therefore plans to increase both the number of surface platforms at sea and their collective lethality.

By distributing enough long-range weapons around as many platforms as possible, it seeks to complicate an adversary’s problem. The conundrum is that sufficient numbers of missiles cannot be sent to sea in cruisers, destroyers or frigates because all these ships are too expensive to be produced in sufficient quantities to overcome their individual physical constraints of weapon capacity. Alternative weapon carriers therefore have to be provided—and they must be cheap.

The U.S. Navy proposes large unmanned surface vessels (LUSV), which are effectively floating missile batteries, built to the simplest possible standards, that can accompany—in the loosest possible sense—the major units which have the sensors, communications and battle management capabilities to deploy the weapons when and where required.

This increase in lethality at a potentially affordable price is one of the most interesting ideas in the U.S. Navy’s entire concept of distributed maritime operations. But its reliance on unmanned units—rather than vessels which can be unmanned if necessary—effectively confines the use of the new type to high-intensity conflict only. Smaller navies certainly cannot afford such specialization—and it is arguable that the U.S. Navy can’t, either.

The most important suggestion of the CSBA study is to man the vessels while retaining the option to operate them unmanned, rather than the LUSV’s optional manning of a vessel fundamentally intended for unmanned operations. There are two key advantages to having what the authors call a corvette (DDC). First, in high-intensity conflict there are likely to be many situations in which the adaptability and flexibility of humans in the loop will still be important and perhaps critical. Second, as the study observes, there is more to force structure than combat.

Many tasks in situations short of war could effectively be fulfilled by such substantial vessels—at 2,000 tons, both the LUSV and DDC are bigger than the Royal Australian Navy’s new offshore patrol vessels. Furthermore, the DDCs would be much more cost effective and appropriate in many presence and maritime security tasks than major surface combatants. An Arleigh Burke–class guided-missile destroyer, for example, has never been a good fit for activities such as the Oceania Maritime Security Initiative, in which U.S. Navy surface units host fishery-protection personnel in the Central and South Pacific.

Simple, multipurpose vessels which have the capacity to embark vertical launch tubes and the data links necessary to allow external initiation and guidance of the weapons onboard, but which are capable of deployment in many other scenarios, have obvious attractions for smaller navies like the RAN and the Royal Navy that are under pressure to expand. However, although the CSBA study argues for a reduction in the number of U.S. Navy major surface combatants to allow a greater number of DDCs and an even larger fleet of smaller unmanned units, this option is not available to either the Australian or British services, which need all the higher capability hulls they are currently promised.

But it does offer a way of increasing offensive power in which less money need be found for additional platforms and more can be made available for missiles. The next generation of offshore patrol vessels could look very different to the Arafura class soon to enter service with the RAN, or the British River class.

Finally, the study’s judgement that nucleus manned platforms may be preferable to unmanned units confirms that we need to be careful not to become caught up with enthusiasm for autonomous vehicles for their own sake. For example, how does one prevent an unmanned unit from being seized by the enemy? It doesn’t take too much imagination to conceive of a special-forces-configured submarine deploying boarding parties in small craft to capture an unmanned unit—perhaps even with the intention of re-employment.

The great science fiction author Isaac Asimov wrote a story in 1958 titled ‘The feeling of power’. In it, he postulated the rediscovery of arithmetic and mathematics at a time when humanity had surrendered calculation entirely to computers. As anyone can attest who has watched a teenager struggle with change at a cash register, this process is well underway—and arguably is accelerating with the onset of the cashless economy.

In Asimov’s story, in the midst of a major war an individual works out how to add, subtract, divide and multiply. This is immediately seized upon with the idea that manned systems would be cheaper and more effective alternatives to computerized units. Appalled at the weaponization of his rediscovery, the hero of ‘The feeling of power’ kills himself. But the genie is out of the bottle.

The point is that artificial intelligence and remote control, even as they become ever more important, must be complementary to human decision-making, not its substitute. Cyber warfare only increases the need for intelligent human beings ‘in the loop’.