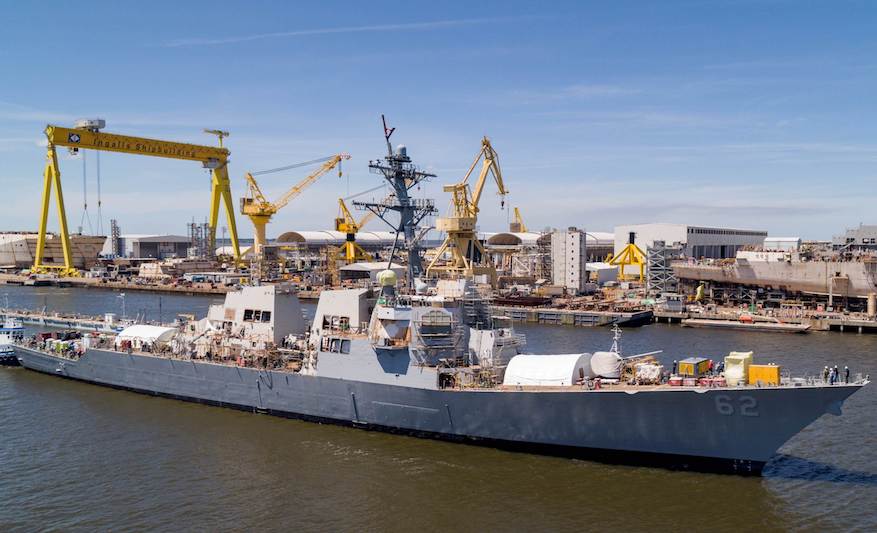 A deficit of ship repair capacity and an expected change in the Navy’s needs for large combatants versus smaller ones may force the entire industry to rethink their roles in construction and maintenance work going forward, a panel of officials said this week.

The two halves of the Navy’s Team Ships acknowledged that more companies would need to get involved in ship repair, and also that more companies getting involved on the construction side could cause hardship from some of the traditional shipbuilders that have spent years optimizing their yards to build large warships.

“Think about how long it took [USS Fitzgerald (DDG-62) and USS John S. McCain (DDG-56)] to get back in operations” following fatal at-sea collisions in the Western Pacific in 2017, he said.
“We’ll see what we do with [USS Bonhomme Richard (LHD-6)], but that’ll be a massive effort to repair her if that’s where the decision goes – I’m talking years most likely. I think public and private investment is needed” to grow the ship repair industrial base. 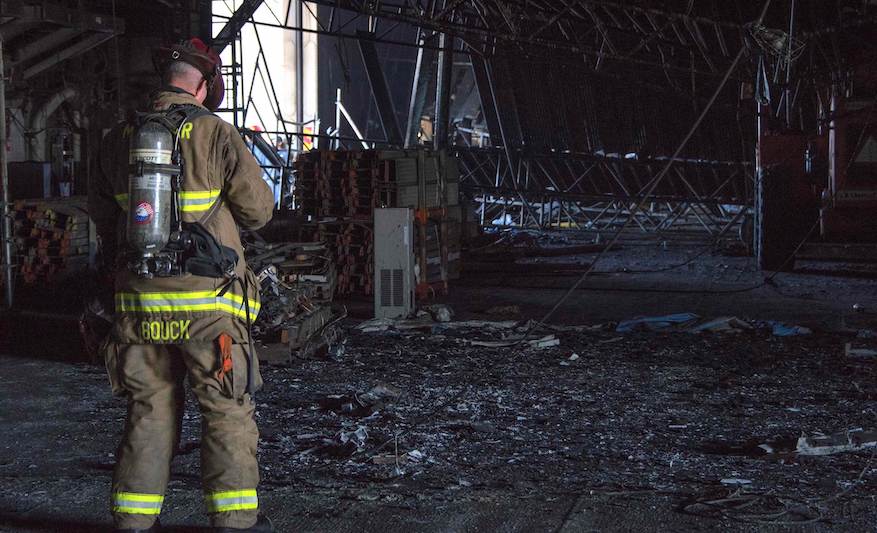 Ver Hage said the existing repair industrial base is working hard to get more efficient at the work it does, but ultimately that base is too small, especially as the Navy tries to grow its fleet.

The rear admiral cited Titan Acquisition Holdings as one example of private investment: private investment firms The Carlyle Group and Stellex Capital Management came together to buy repair companies Vigor Industrial and MHI Holdings – and most recently, Huntington Ingalls Industries’ San Diego Shipyard – to invest in the repair business on both coasts of the U.S. in a way that each small company might struggle to do on its own.

Ver Hage said the fact that such large investment firms showed interest in ship repair means there’s a future to this business model.

He also cited the CARES Act, passed by Congress to keep the economy afloat during the coronavirus pandemic, as an example of public investment in shipbuilding and ship repair jobs as vital parts of the military’s health but also the economy’s health. 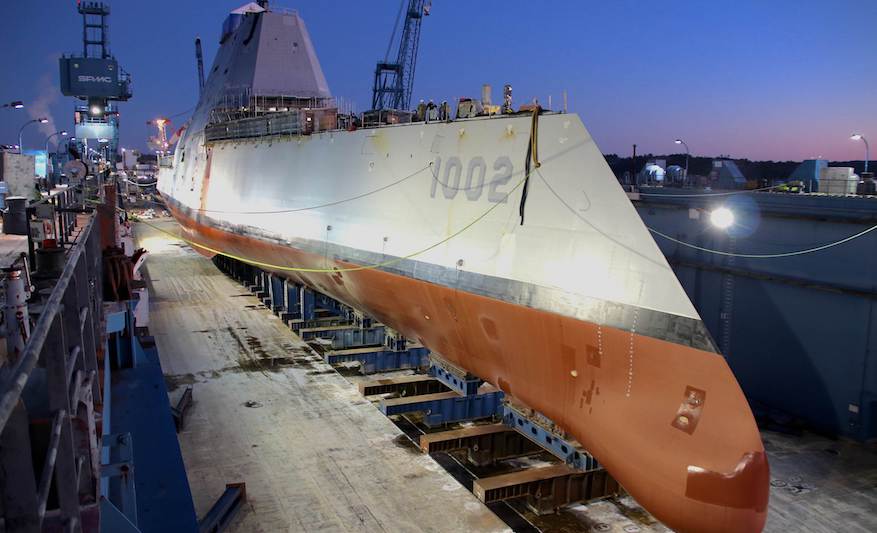 Lyndon B. Johnson (DDG-1002) is made ready before flooding of the dry dock at General Dynamic-Bath Iron Works shipyard, and subsequent launching of the third Zumwalt-class destroyer in 2018. US Navy Photo

The second fact the admirals wrestled with is that the shipbuilding industry in recent years has relied primarily on seven yards owned by just four companies to build large warships – but all indications point to a future fleet that relies less on destroyers and large amphibious ships and more on a large number of small amphibs, small combatants and unmanned surface vessels.

“If the force structure comes up with the need for a portfolio of lesser large ships and more of the small ships, then the larger yards will have to determine how to flex to that. Their infrastructure is set up to build big ships. Are they capable of building smaller platforms? I think the answer is yes. There’s also lots of opportunity for smaller yards who already are pretty efficient at building some of those smaller ships. So assuming that the piece of the pie does not grow, there will be a discussion about where the dollars go and where that capability exists,” Rear Adm. Tom Anderson, the program executive officer for ships, said during the same event.

There have long been worries about the consolidation of the shipbuilding industrial base. If the U.S. were to go to war, so few yards have experience working with the Navy and building Navy ships, it would be hard for them to ramp up and help in a shipbuilding surge. The idea of bringing smaller yards into the industrial base has been one of the positives to come out of the discussions of Distributed Maritime Operations and its call to have a lot of small and unmanned ships in the fleet: more companies can compete for these types of ships, bringing fresh ideas and a larger industrial base for the Navy to work with.

However, if the large yards see a decline in business, it’s unclear what that will mean for the yard and their workers. General Dynamics’ Bath Iron Works, for example, only builds destroyers, which may be in less demand under the upcoming force structure assessment, still being reviewed by the Pentagon. Ingalls Shipbuilding is nearing the end of its work on the National Security Cutter, and its work on destroyers and amphibious ships – while certainly not in jeopardy of going away altogether – could see reduced demand as the Navy and Marine Corps eye smaller combatants like a frigate, and a Light Amphibious Warship (LAW) and small amphib in lieu of the traditional ships Ingalls has built for decades.

Anderson said he took a trip to the Gulf Coast since taking over PEO Ships earlier this summer, and he said he didn’t realize how many shipbuilders were there that not only work on Navy warships but auxiliaries, foreign military sales ships and commercial ships for the oil and energy sector, for example. These yards would all be set up well to compete for small or unmanned ships for the Navy, but they might be going up against large yards if they find themselves needing the work, too. 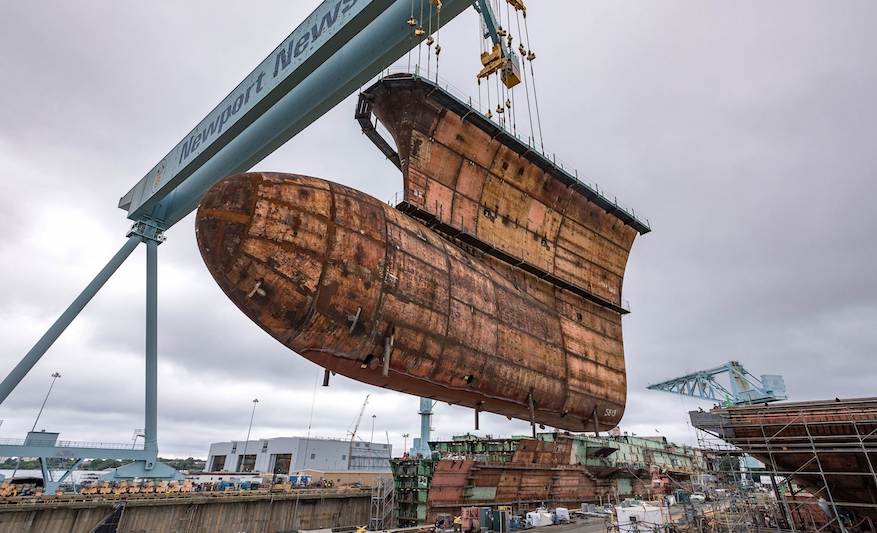 “Not knowing what the force structure analysis is going to tell us we need, I think it’s hard to say at this point, because I think the big yards could flex, absolutely. Are they better aligned at the moment to build the larger ships that they’re building? Yes. We’ll just have to see how the [FSA] plays out,” Anderson said.

The two situations come together in an interesting way: the admirals suggested separately that, in a time of war, small repair yards could be called upon to help build ships; and they suggested that large yards could look to repair work to supplement any lost shipbuilding work – highlighting the predicament the entire enterprise finds itself in, with capacity and capability not necessarily matching up to needs and budgets.

Prior to Ver Hage’s comments about lack of ship repair capacity for peacetime, let alone wartime, event moderator and Hudson Institute senior fellow Bryan Clark said, “the commandant of the Marine Corps recently talked about the concern he has regarding the ability of the Navy shipbuilding industrial base and ship repair industrial base to restore or rebuild the fleet in the face of losses that might occur in a conflict. And he talked about how this is an element of deterrence: if you don’t have the ability to sustain a fight, a protracted fight, then perhaps your adversaries think they can wait you out or just push through and eventually you’ll get to the point where you can no longer continue the combat.”

Breaking Defense first reported on these comments Commandant Gen. David Berger made in a draft document.

In response, Anderson said that about two years ago Assistant Secretary of the Navy for Research, Development and Acquisition James Geurts got a group together to talk about wartime planning for the industrial base, and what work could be done now to be better prepared in case of war. USNI News previously reported that much of that planning work was put to use when the COVID-19 pandemic started, with the Navy already having a good idea of where work is done and what vulnerabilities exist, thanks to this ongoing effort. 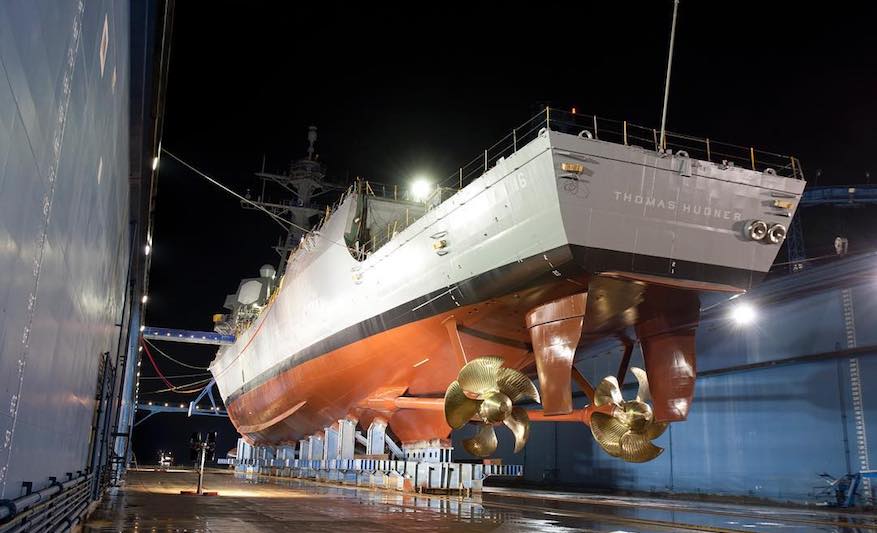 Anderson said that some of the questions asked during this planning effort were how shipbuilders could rapidly deliver ships nearing the end of their construction, how they could accelerate construction of hulls still in early phases of work, and how ship repair companies could contribute to a ramped-up shipbuilding effort if called upon to do so.

On the other hand, John Rhatigan, chairman of the Marine Machinery Associations, said during the discussion that shipbuilding yards ought to be contributing to the repair effort as well to address the deficit of repair capacity.

Noting that submarine builders take on submarine overhauls to supplement their construction work, he said, “there are shipyards that maybe don’t think they’re back into overhaul mode, but they probably need to. I’ll give you a good example: Bath Iron Works. They should be able to do overhauls and new construction at the same time. They just went through a strike and they’re behind schedule and things like that, but I think they can get back on schedule and I think they should be available, or trying to make themselves available, for overhaul work.”

He said these yards in the past have been swayed against doing repair work because, depending how the contract is structured, it could be a financially risky venture, especially given how common it is for growth work to appear once an overhaul is started.

“I think there’s capacity there that hasn’t been tapped yet,” Rhatigan said.
“I know that people have tried in the past, and just because someone said no in 2018 doesn’t mean they’re going to say no in 2021.”